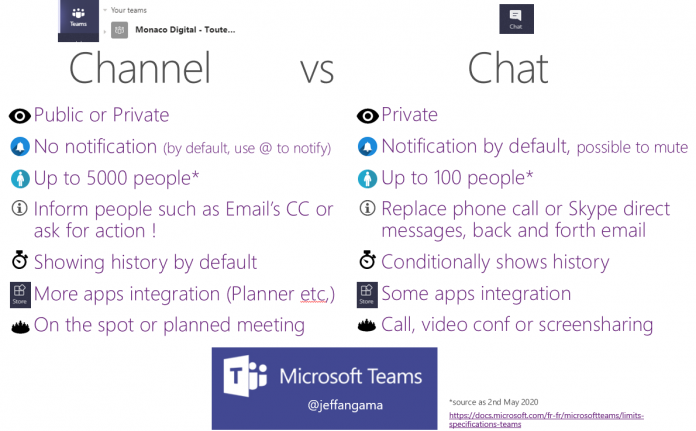 Summary of some important features of channel :

What goes in a channel ?

Think about Team as CC feature in outlook

You want to send a mail to your team ? Use a team channel instead and notify people that are the recipient of the message. Other member of the Team are like the “cc” ibe

You are a manager ? Replace email for team announcement

Use General canal and notify @yourTeamName instead of sending an email. To send important announcements, information to your team.

Start meeting for your team

Start a meeting in a chanel, and invite your team or schedule it. Members of the team will see the meeting started with this icon. Invite member of the meeting from the visioconference Channel are like group of people in an open space

Communication in an open space could relate to a TEAM, think about each canal as a group of person chatting about a specific topic. When you are in Teams, you see the channel getting bold, it’s up to you to join the conversation But most important, documents are in a central location

Once dropped in a channel and in the file tab, a document posted in a Team is saved in the SharePoint site at the back of the Team. It is meant for centralizing the document to the people part of the team. New team member will access every previously shared documents !

Users can create 1:1 or multiple people conversation. There is no need to create a Team for an on-the-spot conversation that doesn’t need to be shared to the entire team.

When using a conversation ?

Do you need assistance to empower your users ? Schedule a visio conference training with me!

Article en anglais, puis plus bas en français If you are an individual you can get teams for free following this tutorial. For companies, that...
Read more
French

RELATED ARTICLES (selected for you)

Article en anglais, puis plus bas en français If you are an individual you can get teams for free following this tutorial. For companies, that...
Read more

Following the article - Column Formatting options let's have the same exercise for this feature View Formatting announced during SharePoint Conference 2018. This is a...
Read more

So you have Teams for your own company, and your customer invites you as a guest to his tenant (Article - Expand your collaboration with...
Read more